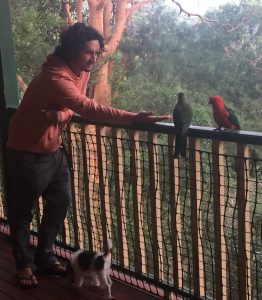 Sergio was a visiting postdoc from the National University of Córdoba, Argentina, where he is in the Department of Ecology and Biodiversity. Sergio joined the lab for a six month visit on his own funding before winning an Endeavour postdoc for an additional six month postdoc during 2016-2017. Sergio’s postdoc was to work on UV-based display behaviour in blue-tongue skinks. Part of this study involved a particularly tough challenge – trying to figure out how to synthesise a UV signal. Sergio ultimately teamed up with a lab working on nanostructures and they were able to replicate the UV structure of the tongue after matching it with the structures obtained from scanning electron microscopy. At the same time, Will Bailes, an engineering student at Macquarie, was building a robo bluey in order to test receiver (kookaburra) responses to a UV-tongue. Sergio also measured the spectral reflectance of hundreds of blue-tongues from multiple species. He also conducted a large number of behavioural trials on the eastern blue-tongue.

Find out more about Sergio’s work on his homepage and ResearchGate page.

Julia worked on our grant on social intelligence and comparative cognition in lizards. For this work, she gained lots of experience dissecting and preserving brains. She did lots of other things related to the Egernia project too.

Read all about Julia’s work on her web page.

Naïla was the Lizard Lab’s lab manager and a postdoc to boot. She wears a lot of different hats! Her main job was to drive the brain work we are doing on social lizards in the Egernia group. Naïla did her PhD in Andy Barron’s lab at Macquarie, on honeybees. She has a background in neurobiology. Unfortunately for us, but fortunately for Naïla, she was offered a much higher paying job at UNSW and thus moved to greener pastures!

Take a look at Naïla’s published work on ResearchGate. Naila also has a Google Scholar page. 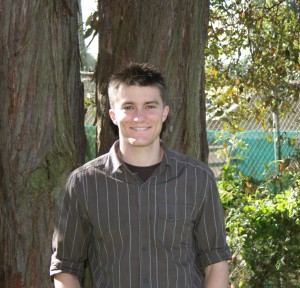 After finishing his PhD in the lab, Dan helped Martin and Dick Byrne with an ARC-funded grant on social learning in Egernia  skinks. Dan then moved to the University of New South Wales on an Australian Research Council Early Career Researcher Award (ARC-DECRA), where he was also offered an extra year. While in his final year, Dan was able to win a highly competitive lectureship at the Australian National University (ANU) starting in February 2019.

Visit Dan’s webpage to find out about his current research. 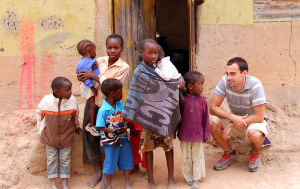 Pau is currently a lecturer at the University of Valencia. After leaving the lab, Pau was awarded a Marie Curie Fellowship at the University of Oxford, where he worked with Dr. Tommaso Pizzari’s at the Edward Grey Institute. Pau is still an active collaborator with several members of the lab. While a postdoc in the Lizard Lab, Pau worked on spatial cognition in Eulamprus quoyii with Martin, Dani and Dan. He also worked on signalling in Blue-tongue skinks with Martin, and several other on-going projects. Check out Pau’s Behaviour and Evolution lab web page.

Everyone on this page from here on down was a postdoc while the lab was based at the University of the Witwatersrand in Johannesburg, South Africa.

Adnan was associated with the lab as Devi’s chameleon field partner and as a lab stats adviser and general trouble-shooter.

While in the lab, Adnan finished writing his PhD. Following this, he followed his true passion: land snails! Adnan took up a postdoc on African snail systematics and biogeography with Dai Herbert at the Natal Museum.

When he moved back to Australia with Devi he began a postdoc at Museum Victoria, before accepting a permanent position in 2010.

Jess worked on UV-status signalling in Augrabies flat lizards (Platysaurus broadleyi) and did an elegant experiment in which she reduced UV reflectance using a combination of sunblock and car wax! Jess was also involved with a project on the Waterberg flat lizard (Platysaurus minor) with Belinda Lewis and Martin Whiting. Jess then left the lab to do a postdoc in Panama, through the Smithsonian Tropical Research Institute (STRI). She briefly moved back to Canberra before moving to the UK with Stuart Dennis, before taking up a postdoc in Jon Slate’s lab at the University of Sheffield. In December 2009, Jess was awarded a Marie Curie fellowship to return to STRI in Panama.

Jess is currently a research fellow in Zurich. Check out her work here.

Lydia was funded by a combined National Research Foundation-University of the Witwatersrand postdoc. Lydia worked on the cognitive ecology of molerats. She tested the role of habitat complexity on spatial navigational ability and memory retention by comparing long-term captives with freshly caught wild individuals in a series of maze tests. This work was published here:

Lydia is now living in Canada with her husband and two huskeys!

Phil won a Claude Harris Leon postdoctoral fellowship. He worked on sexual selection in foam nest frogs (Chiromantis xerampelina). These frogs form extraordinary mating aggregations in which one or a few females mate with multiple males. There is no male-male competition. Phil did amazing experiments testing for direct and indirect benefits of polyandry.

Phil was awarded a fellowship at Monash University. In 2011 he moved to the University of Woolongong, where he has a permanent position.