After attending the 8th World Congress of Herpetology in China, I had a night and a day in South Korea before flying on to my next destination, the US. What to do? As it turned out, I had a windfall (thanks Julia). I met Amaël Borzée, a PhD student from Seoul National University. Amaël has been working on frogs in South Korea for the last 6 years and he kindly offered to take me to his sites. With any luck, I might be able to see a large proportion of the South Korean frog fauna (ca. 13 species)! See the rough checklist at the bottom.

My flight from Shanghai left an hour late and I then had to make my way to the city, more than an hours drive from the airport. After dumping my stuff at my hotel, I met up with Amaël and two undergraduate students: Heo Kyongman (허경만) and Bae Yoonhyuk (배윤혁). We headed to Imjingak, around Paju, about an hour’s drive to the north. As we got closer, Amaël pointed to the car’s GPS. There was a stark contrast between North and South Korea (see photo): one half of the GPS was lit up with roads and other features while the other half was pretty much solid black. No prizes for guessing which is which. Before we got to the field site we took a short detour for a traditional Korean dinner. The spread was amazing, and the eel was especially good! It was about 10:30 pm when we left the restaurant, so a late night was on the cards. 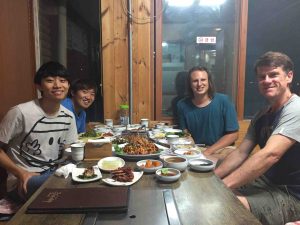 Amaël’s sites are in rice paddies with patches of surrounding natural vegetation. The air temperature felt a little cool and we didn’t hear any frogs calling. However, we saw lots of really interesting spiders (e.g. Araneus ventricosus), katydids and various insects, although general activity was far from overwhelming. It was clearly the tail-end of the active season. The first frog we found was a Pelophylax chosenicus (see photos below). We also heard the odd frog hopping away (Pelophylax nigromaculatus–based on the sound of the splash), but didn’t see them. Amaël’s sites are adjacent to the Civilian Control Zone, which is a restricted site just south of the DMZ. We could see the fence from where we were, and we were maybe 150 m from an army base. 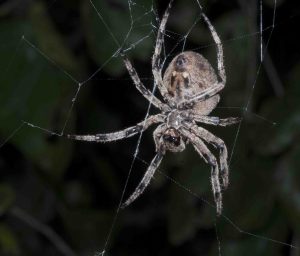 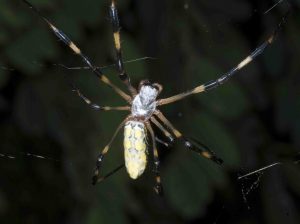 After working some of the rice paddys, we checked a tree and got lucky, finding two species of hylid treefrog, one of which (Dryophytes suweonensis) is endangered. The other, Dryophytes (formerly Hyla) japonicus, looks very similar (there are differences in the angle of the lines between the nostril and the eye, and in overall body morphology). Although the frogs were a highlight, they were superseded by a more significant sighting. While driving down a road adjacent to the fence (we were about 5 m from the fence), we saw a cat on the road in front of us. We initially thought it was just a feral cat but once it got closer we realized it was a leopard cat (Prionailurus bengalensis). This was only the second time Amaël has seen one in 6 years of living in Seoul and in over 400 days in the field!

After finding the frogs, we walked around in a nearby grove of trees and saw a trench dug by the army that parallels the DMZ. Apparently it gets maintained continuously, just in case the North Koreans invade. And as an added bonus, anyone doing military service can keep busy–it must be one of the longest trenches in the world. There were also some underpasses with large concrete blocks positioned so that they can be detonated and block the path of tanks and vehicles. The whole experience made me think of my masters supervisor from Texas A&M University, Jim Dixon, who published a paper on the amphibians and reptiles of Korea from material he collected in the trenches during his time as a soldier in the Korean conflict*.

Overall, it was a hugely successful evening and well worth the short diversion!

A checklist of the frogs of South Korea by Amaël Borzée