Snakes have traditionally been viewed as the poor cousins of lizards where social behaviour is concerned.  This is perhaps an artefact of generally being more cryptic and less tractable than lizards and therefore more difficult to study. Nevertheless, snakes are really just legless lizards and share the same chemosensory system (Jacobsen’s organ for vomerolfaction) as lizards.

Small-eyed snakes are a small rock-dwelling elapid snake from south-eastern Australia known for engaging in contest competition over resources. Because they refuge in crevices, they are an ideal system for testing chemosensory preferences in relation to chemical social cues. Mitch Scott focused on the question of whether social cues influence habitat selection and whether there is a winner-loser effect from male-male contests such that losers avoid refuges scented by contest winners. Mitch extracted scent from snakes based on their sex and social status and conducted a number of refuge-scented choice-trials.

The results were fascinating. First, females preferred refuges scented by other snakes (male and female) over unscented refuges. Males preferred refuges scented by larger females, which is predicted for fecundity selection. And interestingly, females preferred larger males, which is predicted by sexual selection theory. Similar patterns have been documented for lizards. Surprisingly, there was no evidence of a winner-loser effect and males apparently didn’t worry about entering a refuge scented by a rival that had defeated them in a contest. Overall, our results underscore the importance of chemical cues as a source of social information, thereby allowing individuals to make strategic decisions about space use. 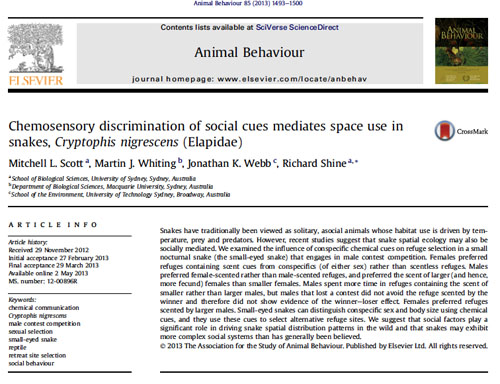