A lizard’s guide to mating: Alternative reproductive tactics give males an edge in finding the ladies

Sexual selection – the differential reproductive success of individuals – is a powerful evolutionary force. Sexual selection can lead to evolution of both beautiful and bizarre phenotypes, such as peacock trains, deer antlers and the complex displays and bright colours of many lizards. Although we see these tell-tail signs of sexual selection across species, sexual selection can also lead to an astounding diversity of phenotypes within a single population, particularly among the sex that compete most for access to mating opportunities. Generally speaking, males are often the sex that experiences the strongest sexual selection because some males can monopolise mating opportunities with other males loosing out, while at the same time investing less into offspring production and care. This has lead to an abundance of alternative reproductive tactics (ARTs) in the animal kingdom, where males within a population adopt different behavioural, morphological and physiological strategies to gain access to females. Barry Sinervo’s wonderful side-blotched lizards are an amazing example of this diversity. Males exhibit three different reproductive strategies, which are controlled by a genetic OBY locus (Sinervo and Lively, 1996. Nature, 380: 240-243). Orange males are ‘hyper-aggressive’ defending large territories and monopolising female mating opportunities, while the more passive ‘blue-throated’ male morph defends smaller home ranges. A third ‘yellow-throated’ morph doesn’t defend territories, but rather sneaks matings from orange males. Sinvero and colleagues have shown that these three male morphs are maintained in the population through a process of frequency-dependent selection, whereby the rare morph has an advantage (a fitness advantage) over the more common morphs (Sinervo and Lively 1996). This creates a situation where the morphs cycle in frequency but are maintained in the population over the long-run. However, in many animal systems males adopt ARTs that are not strongly determined by an individuals genotype, but rather adopt tactics depending on their status or condition. These are by far the most common examples in the animal kingdom. The ART that a male adopts may depend on his age, condition or even rearing environment.

Martin Whiting, Scott Keogh and I have been interested in the evolution of conditional reproductive tactics for some time, particularly because Eulamprus seems to adopt this type of tactic. How does selection act on these tactics to produce, at least somewhat ‘discrete’ variation? Is it disruptive selection (i.e. selection that favours extreme phenotypes)? Does selection act on suites of traits so that these traits co-evolve together as a unit? How does selection act in systems where there are no discrete morphological differences between the tactics, but rather just behavioural? Answers, even partially, to these questions may provide some important insight into the early evolution of ARTs, however, they are difficult to answer given that discreteness dominants most systems making it difficult (even impossible) to pin down some of these questions. These questions led us, along with an amazing honours student Kerrie Wechmann, to test out these ideas using our favorite skink, Eulamprus quoyii. The results of this work have recently been published in The American Naturalist. 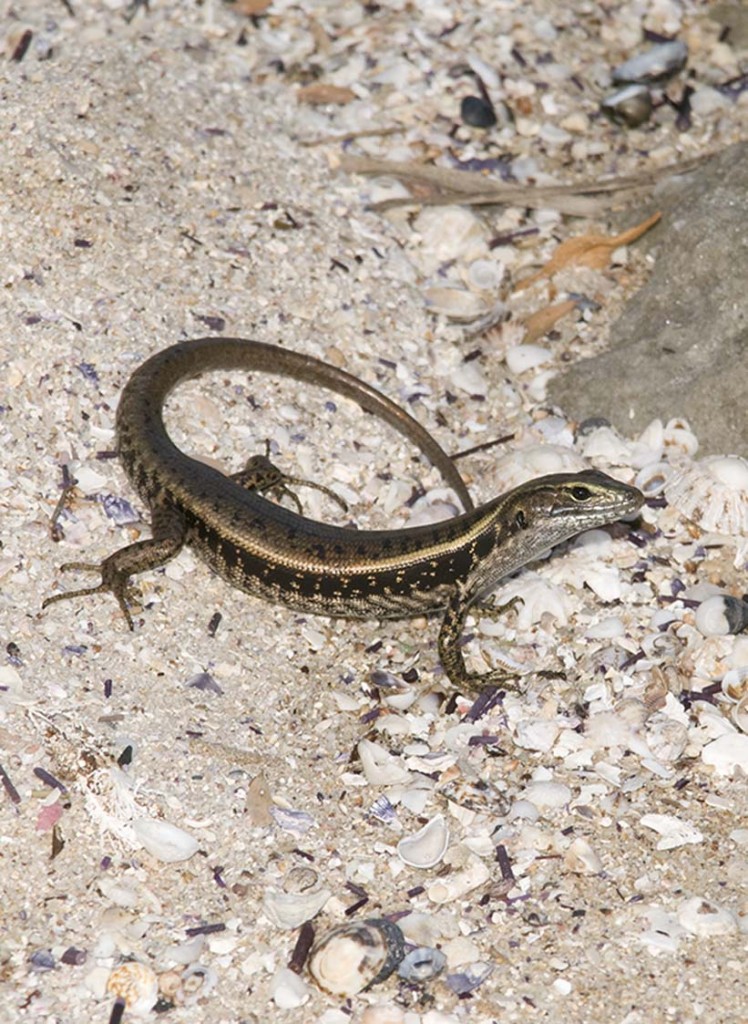 Before we begin let’s take a step back and see what we know about ARTs in Eulamprus. Scott has shown in a closely related species, Eulamprus heatwolei, that males (and females) adopt different RTs (Stapley and Keogh 2005. Behavioral Ecology, 16:514-520; Morrison et al. 2002. Molecular Ecology, 11:535-545). Males can be ‘territorial’ or ‘residents’ whereby they are observed active regularly over the season, adopting a small home range. In contrast, ‘floater’ males are males that decide not to defend a clearly defined area, but rather cruise through the environment. They are not observed as often and when they are observed they are found in very different places giving them a much larger home range compared with residents. Interestingly, Jess Stapley and Scott (Stapley and Keogh 2004. Animal Behaviour, 68: 841-846) have also shown that if you take these males back into the lab and quantify their behaviour ‘resident’/’territorial’ males move through their enclosure much less than ‘floaters’ and also, when scared return from hiding sooner. Now although this was done in a different species, we know that E. quoyii is highly conserved ecologically with E. heatwolei and has a similar mating system. From this information we formed a set of predictions about how selection might act on behavioural traits in E. quoyii and set up a large mating system experiment to test whether sexual selection acts in the predicted direction. To do this we set up 6 large outdoor enclosures and placed 216 adult lizards in them. Through the course of the season we observed lizards carefully and quantified how active they were, their home range and their movement rates in the field. We then brought females into the lab and let them give birth to their offspring. From a small amount of tissue (and using the magic of microsatellite DNA analysis) we determined the paternity of these offspring and linked the reproductive success of males back to their behavioural traits. We then developed a set of models and determined which ones were best supported from our data. Using the best-supported models we then predicted what a male’s reproductive success would be from these data to see how they matched our predictions. What we found was very interesting. As predicted, male home range and activity were very important predictors of male reproductive success. However, we found evidence that males that are active over many days and move little, and males that are active over few days and move a lot, are predicted to have higher reproductive success compared to intermediate males! This was cool because, just by quantifying continuous behavioural variation we found evidence for disruptive correlational selection on the behaviours that we see as ‘somewhat’ discrete in our population. Our results have some important implications for species where sexual selection is strong and where there is opportunity for males to mate with females in different ways (i.e. there are different ‘mating niches’). We hypothesize that males can get females in two different ways 1) by mating guarding females or defending core-areas where females clump and 2) by traversing the environment looking for females that are spatially dispersed and/or sneaking matings from males that have lots of females around them. 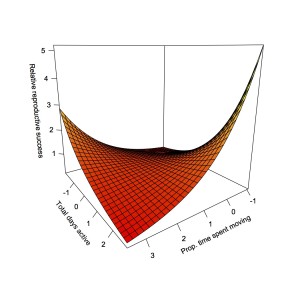 Contour plot of predicted relative reproductive success of males from our models.

Alternative reproductive tactics (ARTs) are predicted to be the result of disruptive correlational selection on suites of morphological, physiological, and behavioral traits. ARTs are most obvious when they occur in discrete morphs with concomitant behavioral tactics. However, ARTs driven by behavior in species lacking obvious phenotypic differences are rarely documented and poorly understood. We quantified selection acting on phenotypic traits predicted to characterize ARTs by observing marked lizards in six semi-natural populations. We quantified reproductive fitness for each male using six microsatellite DNA loci from 226 offspring born to 56 females. Candidate models containing directional and correlational selection gradients were equally supported. As predicted, large males with large home ranges and large males that were observed frequently had the highest reproductive success. We also found evidence that large males that moved little but that were observed frequently and large males that moved frequently but that were observed little were predicted to have high fitness. Model predictions support our verbal hypothesis regarding the phenotypes characterizing ARTs and suggest that large males may be adopting subtly different tactics to acquire paternity. Our results suggest that disruptive correlational selection between behavioral traits may drive the evolution of ARTs in “cryptic” systems that lack overt polymorphisms.

Noble, D.W.A, K. Wechmann, J.S. Keogh, M.J. Whiting. 2013. Behavioral and morphological traits interact to promote the evolution of alternative reproductive tactics in a lizard. The American Naturalist, in press. You can download a copy of the paper here.