Recently, the Pryke Lab published its first paper on a reptile—the iconic Frillneck Lizard (Chlamydosaurus kingii). Both males and females have frills and until now, the consensus has always been that frills play a role in anti-predator behaviour. Not only does the frill startle a would-be predator, but it may also bluff them into thinking that their potential dinner might be dangerous and risky to catch. While this hypothesis still remains to be tested, we explore an alternative hypothesis: that the frill might also play a role in sexual selection and signal fighting ability. We used optic spectrophotometry to objectively measure the colour of the frill and we also measured a range of morphological and functional traits before size matching lizards in staged contests in neutral arenas. Surprisingly, traits such as frill size, head size and bite force did not predict contest outcome. Instead, males with brighter and more colourful frills were more likely to dominate opponents and take gold. As an aside, we (well, Dave, actually) took skin samples back to the lab to determine the source of pigments that generate the colour. Lab tests confirmed the presence of carotenoids which is an exciting result because while carotenoids have been the source of considerable study among our feathered friends, we know little about the role of carotenoids in lizards (but see our lit cited for notable exceptions). To the best of our knowledge this is the first example of a carotenoid-based signal of fighting ability in a lizard. The Pryke Lab is continuing its study of colour polymorphism in frillneck lizards across the entire distribution, so stay tuned for more interesting results in the future! 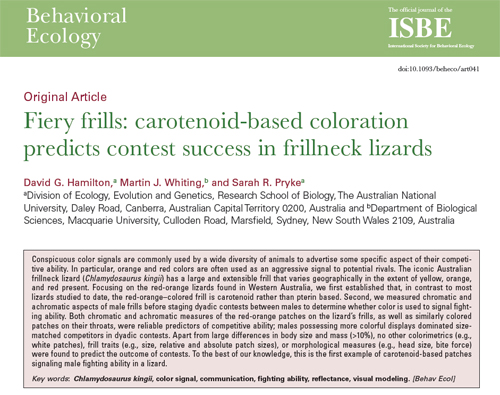 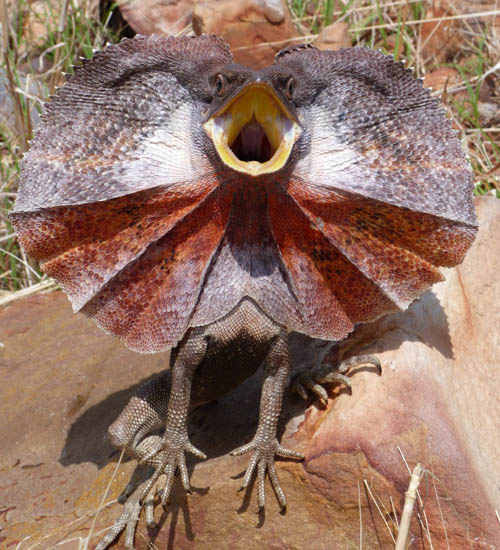 Photo by David Hamilton. A male in a threatening posture (threatening Dave, ofcourse!). The orange-red colouration is carotenoid-based and is the best predictor of contest outcome between male rivals.

Conspicuous color signals are commonly used by a wide diversity of animals to advertise some specific aspect of their competitive ability. In particular, orange and red colors are often used as an aggressive signal to potential rivals. The iconic Australian frillneck lizard (Chlamydosaurus kingii) has a large and extensible frill that varies geographically in the extent of yellow, orange, and red present. Focusing on the red-orange lizards found in Western Australia, we first established that, in contrast to most lizards studied to date, the red-orange–colored frill is carotenoid rather than pterin based. Second, we measured chromatic and achromatic aspects of male frills before staging dyadic contests between males to determine whether color is used to signal fighting ability. Both chromatic and achromatic measures of the red-orange patches on the lizard’s frills, as well as similarly colored patches on their throats, were reliable predictors of competitive ability; males possessing more colorful displays dominated sizematched competitors in dyadic contests. Apart from large differences in body size and mass (>10%), no other colorimetrics (e.g., white patches), frill traits (e.g., size, relative and absolute patch sizes), or morphological measures (e.g., head size, bite force) were found to predict the outcome of contests. To the best of our knowledge, this is the first example of carotenoid-based patches
signaling male fighting ability in a lizard.