Blue-tongue lizards are born smart, at least as smart as their parents!

As children we have much to learn after we are born. We learn to walk, to talk, to develop our social skills, and when we start school we learn how to read, write and do maths.

​Humans, and many other animals, are considered altricial, meaning that juveniles need to be taken care of by their parents until a certain point in time when they can go off and live on their own. Some birds, fishes and reptiles are what we call precocial – they start life ready to face the challenges on their own and with little or no parental care or protection. Scientists have long wondered whether precocial animals are as developed in their ability to learn as they seem to be in other aspects of their life.

Eastern blue-tongue lizards are considered an extreme case of a precocial animal. They give birth to live young and juveniles immediately disperse. The fact that they are ready for a life without their parents right after they are born directly relates to their ability to learn. ​ 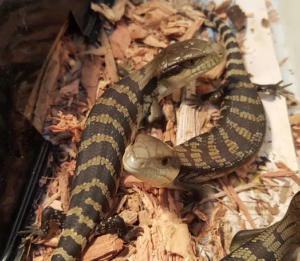 Baby blueys born in the lab.

Similar to our previous study (see below), we used a seven stage visual discrimination task called set-shifting. First, we taught lizards that the food dish in front of a card with an X painted on provided a food reward, while the other dish (in front of a triangle) did not. Next, we wanted to know how lizards perform when we change this rule: in the second stage, instead of the X, choosing the triangle was rewarded. After lizards had learnt (phase 1), we added a second dimension to the cards by painting the background in two different colours (phase 2). These colours were meant to be a distraction for the lizards because they were not relevant for finding food, only the shapes were important. In phase 3 we wanted to know if lizards would generalise what they had learn in the previous stages to novel shapes and colours: ignore the background colour and rely on shapes to find the reward. Finally, in the last part of the experiment we, again, used novel shapes and colours, but contrary to the previous phase we also changed the rule. Instead of the shapes, lizards had to use the background colours to get a reward (Figure 1). All the stages in which we changed the rule are meant to test for behavioural flexibility. If the lizards possess good flexibility they would have an easy time learning during these stages. In other words, they would not take long to reach a learning criterion. 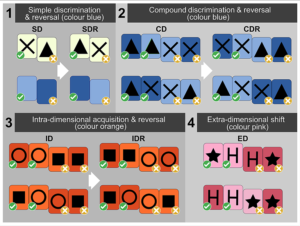 Figure 1. Seven stages of the set-shifting task. One group was taught to discriminate between shapes and the other group between colours.

Overall, lizards were able to learn during all stages of our experiment but most interestingly both adults and juveniles learnt at a similar speed taking approximately the same number of trials to learn. Additionally, when we looked closer at how they learn, both age classes learnt in a similar way. Even more interesting: both adult and juvenile lizards showed good behavioural flexibility (Figure 2).

Juvenile blue-tongue lizards face many dangers during their first weeks of life (and beyond). They may encounter predators for the first time, have to figure out where to sleep and what to eat. Because they are solitary lizards, learning from other blue-tongue lizards, adults or juveniles, is likely rare. This may be why having such good learning abilities at such a young age is so important. Furthermore, in nature, animals often face changes in the environment and need to adjust to survive. An ability to learn new problems quickly and repeatably likely further increases a juvenile’s chances of survival. 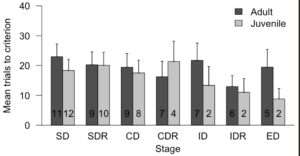 Figure 2. Trials taken until the learning criterion (6/6 or 7/8 consecutive trials correct in a row) was reached for both adult and juvenile lizards across the whole experiment

Overall, our results demonstrate that these juvenile lizards are well equipped to face a life without their parents. Lizard parents don’t care for their offspring, juveniles have to fend for themselves but face the same dangers. They need to be as smart as their parents, otherwise they would not survive. We were already aware that young adult lizards can be better social learners compared to older lizards but how well very young juveniles learn compared to adults has been overlooked until now.