Lizard Lab alumnus Pau Carazo is best known for his work on communication in lizards. Along the way he has dabbled with beetles and now, fruit flies (Drosophila melanogaster). In a recent paper in Nature, Pau and his colleagues at Oxford designed a novel series of experiments to test recent theory that kin selection may reduce harm to females by lowering competition among related males. We know from previous work on Drosophila by Bill Rice and numerous others that sexual conflict is intense and mating can be costly to females through the toxic action of seminal fluid. Sexual conflict and the harm done to females by males is a ‘reproductive tragedy of the commons’ that may even affect population viability, as described by Pitnick and Pfennig in their commentary in the same issue of Nature. 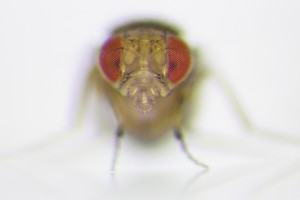 An obvious advantage of working with fruit flies is their rapid generation time and short lifespan. Pau and his coworkers conducted a series of elegant experiments in which males of different relatedness were grouped in threes with a single female (unrelated to the males). In the first experiment the treatments consisted of full-siblings (AAA) or unrelated males (ABC). Females exposed to brothers had a longer reproductive lifespan and as a result, higher lifetime fitness. In short, they found support for ‘reproductive aging’ in which females exposed to ABC suffered a more rapid decline in offspring production in relation to age. In essence, females exposed to related males were able to delay reproductive aging.

Another key result was that brothers showed significantly lower levels of aggression towards each other compared to levels among unrelated males. To test this prediction, the authors had three social group treatments: three full-sibling males (AAA), two full-sibs and an unrelated male (AAB) and three unrelated males (ABC). Fighting was most common in the ABC group and these males also courted females more vigorously (another cost to females).

The authors conducted several other experiments that I won’t detail here, but which you can read about in their paper.

Sexual conflict and co-operation are two ends of the social continuum. Pau and his colleagues nicely demonstrate the important role that male-relatedness, and therefore kin selection, plays in reducing this conflict and thereby benefiting the ladies, even if they are just fruit flies!

Pau also gives a popular account of the work on his blog.