Part I
By Martin Whiting

This post is long-overdue! Here, we are reporting on two field trips to our new study site in Albury, in New South Wales, close to the border with Victoria. In December of last year, Martin, Dan and Geoff While (University of Tasmania) went on a field trip to establish a new tree skink (Egernia striolata) field site. We are currently focusing on tree skinks for a bigger project on lizard sociality and social learning. One aim is to document patterns of family and group-living and the mechanisms driving solitary or family-living. Tree skinks are purported to have quite variable group sizes and are thus a good system for understanding the drivers of sociality. A second aim is to use them as a model system for examining the link between social learning and group living. We are interested in understanding whether social lizards are more likely to make use of social information.

We stayed in Albury and after finding a great breakfast joint (i.e., they serve good coffee), we were all set to venture forth and find a good long-term site. The area has amazing granite outcrops and large boulders that can support family groups of tree skinks. This might be a good time to point out that tree skinks make use of rock outcrops or trees. In some regions they only have trees (see our post about Gluepot) while in other areas such as Albury, there is the option of using trees although the majority of lizards live on rocks. This is another reason why we like tree skinks–we can study the influence of habitat availability and type on social systems and we will be conducting common garden experiments back on campus where we can ‘grow’ lizards from one habitat on another habitat type.

Click on image to see a photo album from the December 2013 field trip.

There is quite a bit of rock quarrrying around Albury, so the challenge was to find a site with a secure future and this we did. We repeatedly sampled the site over a period of days until we felt we had caught the majority of lizards that we saw active at the time. These lizards were PIT tagged, measured, and we took a small sample of DNA that will allow us to establish within group relatedness and hopefully construct a genetic landscape. The other objective we had was to collect gravid females from a different site to bring back to the lab for our social learning experiments.

In April, the Tree Skink field crew trekked to Albury, NSW to map the new long-term site. This time, the crew consisted of Dan, Julia, James and Floriane. Dan was the only survivor from the first trip! After the 6-hour drive from Sydney, we arrived in Albury. The site is atop a large hill where there is a collection of boulders fraught with cracks and crevaces prefect for lizards to hide in. You could see for miles from the top of the hill! The site seemed to be full of life – there were Eastern Corellas, Red-rumped Parrots, and Diamond Firetails flying through all the trees! Yet, it was quite chilly and there were no signs of skink activity.

Yet, the work had to go forward! Our mission was to uniquely number all of the trees and rocks that could contain a family group of Tree Skinks. Over the course of 5 days and after 4 trips to Bunnings Hardware, we numbered a total of 144 rocks and trees that all looked like suitable habitat. Only future trips will tell us how many skinks live in each of those rocks, and if they stay together over the long-term!

Mission accomplished! The mapped site in all its glory.

Another goal of the trip was to capture and mark as many skinks as we could. Yet, when we first arrived we did not see any skinks out basking! So, using a noose to capture skinks was not an option. Partway through out first day, James lit up one of the rock crevice and we found a family group of skinks pressed up underneath the rock ledge! Once we found out where the skinks were hiding, we started to think creatively how to capture them! Using small copper tubing we were able to coax the lizards out of their crevices, and during the week we caught 30 skinks using this method! A lot of the skinks were found in groups of two to four individuals, and the groups contained adults, juveniles, and young of the year. During this trip we were able to find more males then had been captured during the previous trip in December 2013, and the sex ratio of animals we caught was about 1:1 males to females. This suggests the group make-up may not be consistent throughout the year, and raises some very interesting questions! We are looking forward to returning, now with the site prepped we can concentrate on catching and marking as many lizards as we can! 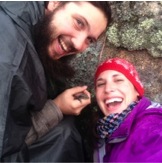 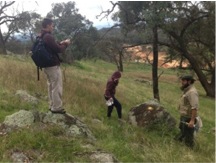 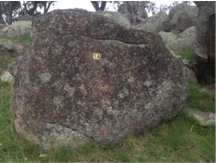 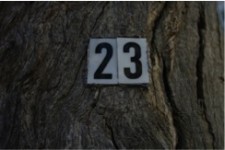