Dispatches from the field: touring China’s deserts in search of toad-headed agamas

I am currently in Xinjiang Province, northern China, with Dr. Qi Yin, our collaborator from the Chengdu Institute of Biology (CIB), which is part of the Chinese Academy of Science (CAS). We have funding from CAS to study the evolution of complex visual signals in toad-headed agamas (Phrynocephalus) and this is the second year of this project. Unfortunately our most energetic team member, Dan Noble, couldn’t make the trip this year—something about handing in a PhD thesis and getting married.

After 17 hours of travel I arrived in Chengdu without my luggage. My suitcase, containing some quite important equipment, was still in Singapore. As an aside, you may have read about how the recent forest fires in Indonesia were enveloping Singapore and Hong Hong in smoke. When we landed, I initially thought that it was dense fog. Apparently this happens every year, but this year has been the worst, so much so that the Indonesian government issued an apology. Anyway, back to my suitcase. Fortunately, a really helpful employee of the airlines was able to locate it. The next issue was that we were flying to Urumqi (about 2500 km to the northwest) at 9 am the next morning. After arriving in Urumqi and a few phone calls later my suitcase arrived that night and we were able to hire a car and drive to Huocheng (645 km) the next day. This is the site of our project on the enigmatic Phrynocephalus mystaceus, in the Tukai Desert. We were able to wrap-up this project and begin another long drive to Yuli, 700 km to the southeast. We didn’t quite make it because of some quite challenging driving conditions including being delayed for an hour because an 18-wheeler was stuck!

We spent several days in Yuli, searching some very interesting sand dunes for Phrynocephalus forsythii. While we were able to find lizards, they were in really low density and appeared to be hunkering down in their burrows. We decided to head to the south, where they are supposedly at higher density. We drove about 400 km south to the city of Ruoqiang. This is a spectacular drive because most of it is through the Taklamakan Desert, one of the largest sandy deserts in the world and which extends about 960 km from west to east. 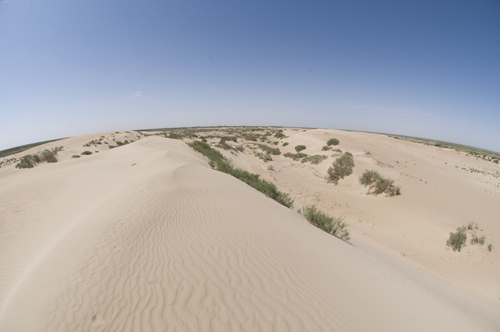 Phrynocephalus forsythii habitat outside the town of Yuli in Xinjiang Province. This is probably part of the Taklamakan Desert. 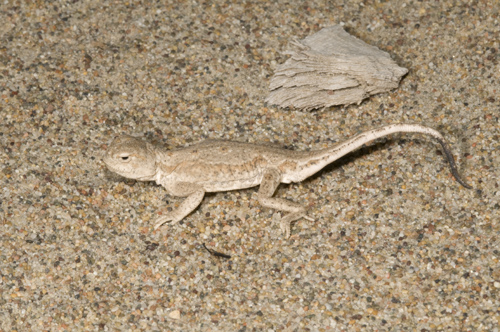 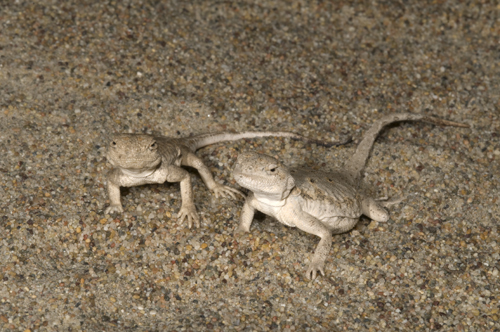 We are currently in Ruoqiang where we have found another species we have on our list: Phrynocephalus axillaris, which unlike P. forsythii which lives on fine sand, lives on stony ground on gravel plains. This species is characterised by a pink patch in its armpit. We have had a bit of bad luck with poor weather—a sandstorm has been blowing for two days although we found a site where there was still some lizard activity. At the moment we are finding quite a few more females active than males, which may have to do with their reproductive state and their need to bask. In the coming days we will be filming male display behaviour when they are presented with a rival male or a female. This is another species with complex and dynamic display behaviour. We will also start posting some video highlights from the various species we have been working on.

Our next stop will take us to a new desert, the Gobi! Stay tuned for more updates, photos and video. 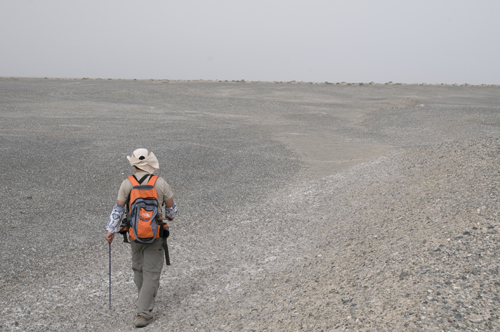 Dr. Qi Yin looking for Phrynocephalus axillaris near Ruoqiang, on gravel plains which have been heavily worked over for minerals and rocks.

Phrynocephalus axillaris. Both males and females have the characteristic pink patch in the axillary region. 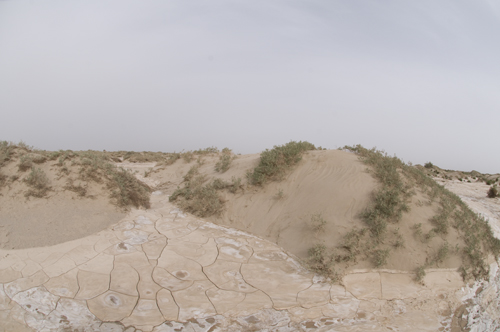