Do I, or don’t I? Are lizards capable of inhibitory control?

We often think of reptiles as somewhat simple – entirely driven by instinct and the basic need for survival. That is where the expression “Reptilian Brain” comes from. It is certainly true that the anatomy of the reptile brain is different from that of mammals, however, we do not know what goes on inside that brain.

Recent research has shown that reptiles are certainly not as simple as we think. For example, some skinks are known to show social learning and behavioural flexibility to solve novel challenges in different ways. It seems we are not giving our scaly friends as much credit as they deserve.

How smart are reptiles really? How do you even test intelligence?

As you can imagine, figuring out how ‘clever’ animals are, is incredibly difficult. Usually, animals are tested in special experiments and their performance is then used as a proxy for how intelligent they are. However, it is difficult to be certain because performance can be affected by so many other things. There is not only great variation in performance between families and species of animals but even on an individual level, just like each human is a unique person. Additionally, if we want to compare between groups of animals, we have to design tests considering their unique needs because animals could be “intelligent” in different ways. Albert Einstein once said: “Everyone is a genius. But if you judge a fish by its ability to climb a tree, it will live its whole life believing that it is stupid.”.

There is no easy way to tell whether reptiles are smart or not. Instead we need to target different aspects of their cognitive abilities to shine a light on their reptilian smarts. One such ability is inhibitory control, which is a basic process that enables an individual to take control of their own actions even when confronted with a highly desired goal. Such control is important to be able to execute more complex skills such as planning, reasoning and self-regulation. Think of it this way: Imagine you’ve got a date at a flash restaurant in the evening and you know if you eat that delicious piece of cake now you might not be able to fit in your dinner tonight which could spoil the date. You are now executing inhibitory control to not eat that cake and have a more enjoyable date later.

We wanted to know what lizards do in this situation, well minus the date and the cake. Essentially we tried to find out whether or not lizards were able to show inhibitory control when faced with a delicious treat. Answering these questions can fill the gaps in reptilian cognition and help us to understand how intelligence might have evolved more broadly. 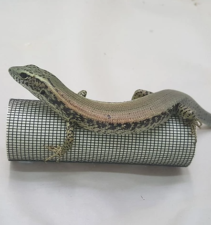 We compared five different species of lizards in a test called the cylinder task. The lizards had to retrieve a food reward placed inside a tube without touching its’ outside surface. At first, lizards were trained using an opaque cylinder in which the treat was not visible (see picture on the left; species Eulamprus quoyii – water skink) until they completed the task and walked into the tube from the side. Lizards were then challenged to do the same except, this time we used a semi-transparent mesh tube. The hard part was that the animals could see the treat and needed to inhibit going for it directly (see video below; species Egernia stokesii – gidgee skink).

Can lizards resist the urge to go directly after a tasty snack?

They certainly can! All five species – tree skink (Egernia striolata), gidgee skink (Egernia stokesii), sleepy lizard (Tiliqua rugosa asper), blue-tongue skink (Tiliqua scincoides scincoides), water skink (Eulamprus quoyii) – learnt to successfully access the cylinder from the side and retrieve the food reward. However, species and individuals differed in their performance, with blue-tongue skinks being the best (see picture above panel b). Blueys also scored correctly in the first 1-2 trials when tested with the mesh tube, suggesting a potential transfer of knowledge between the phases. However, blueys also had the lowest body condition which potentially meant that they were hungrier and had the highest motivation to perform better and gain access to food. We also found that neophobia, the fear of novelty, differed between the species and could have influenced their performances.

Interestingly, we found that the species with the highest percentage of plant material in their diet which were also the most social, performed the worst. Unfortunately, we only had five species of lizards to compare and because the most herbivorous was also the most social species, it is hard to tell how exactly these traits factor into species differences in performance.

Inhibitory control in gidgee skinks from The Lizard Lab on Vimeo.

So, again, how smart are reptiles really?

It’s not a question we dwell on because ultimately, selection acts on what works best in the wild. Instead, we are focused on putting together all the pieces of the cognitive puzzle and lizards continue to surprise us!

If you want to learn more about this study and get an in-depth description of what we did and what it all means, please have a look at our publication here.