For anyone interested in comparative cognition, these are exciting times and 2012 has been a good year for lizards! Manuel Leal and Robert Powell’s study of Anolis cognition demonstrated that lizards are capable of behavioural flexibility. (Behavioural flexibility, a key feature of advanced cognition, is the ability to solve a novel problem, or develop a novel response to an existing stimulus.) After decades of focus on bird and mammal cognition, their study was a welcome change. The paper received lots of attention, although some challenged the results (but see Leal and Powell’s excellent rejoinder).  A few months later, Josh Amiel and Rick Shine published the results of their work on cognition in Bassiana duperreyi, a lizard with temperature-dependent sex determination. Lizards that hatched from eggs incubated at higher temperatures learnt the location of a safe retreat faster than lizards incubated at a lower temperature. For decades we have known that a multitude of traits are phenotypically plastic and that as a result, various morphological and life history traits can be affected by an organism’s incubation or maternal environment. Their study is the first to address the effects of incubation conditions on cognitive ability. (Incidentally, Ben Clark, an honours student in the Lizard Lab is following this work up in collaboration with Josh, Rick and Martin.) More recently, LaDage et al. used a Barnes maze to test spatial learning ability in the side-blotched lizard (Uta stansburiana) and argue that this species has spatial memory ability.

Like La Dage et al., we were aware that lizards have traditionally been regarded as slow, inflexible learners when confronted with spatial tasks. The Eastern Water Skink (Eulamprus quoyii) is a common lizard species in Eastern Australia and even on our campus at Macquarie University. This species is also the focus of Dan Noble’s PhD and given what we now about its biology, we used it in two different studies of spatial learning. One of these studies has just been published online in Biology Letters. Dan Noble, with excellent assistance from lab intern Laura Hagemann, used simulated predatory attacks as a form of reinforcement to test the ability of lizards to learn the location of a safe refuge (out of three choices). A notable difference in this design is that this study was conducted in 3 m outdoor tubs. While you might argue that this limits comparisons with studies conducted in more tightly controlled laboratory conditions, it meant that lizards were learning under more natural conditions similar to those in the wild. After learning the location of the safe refuge, we conducted a reversal of this task, switching the location of the safe refuge. A key strength of this study was our large sample size. Sixty male lizards were tested for spatial learning and of these, 19 (32%) learnt both the spatial and reversal tasks within 10 days (3 trials/day) (spatial task mean: 8.16+0.69 (s.e.) and reversal spatial task mean: 10.74+0.98 (s.e.) trials). These results demonstrate that water skinks are capable of flexible spatial learning and we hope that this work, and the studies mentioned earlier, will help stimulate future studies of cognition in lizards that differ in phylogeny, ecology and behaviour. 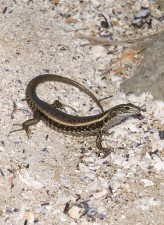 Stay tuned for a forthcoming Lizard Lab study that addresses the relationship between personality, alternate reproductive tactics, and cognition. In short, it addresses the idea of cognitive syndromes and also examines sex differences in spatial learning in this same species, Eulamprus quoyii. This formed part of Pau Carazo‘s Endeavour postdoc at the Lizard Lab.

Download our paper from the Royal society’s web site or e-mail Dan (daniel.wa.noble@gmail.com) for a PDF.