Hot off the press! Roommates are not all they’re cracked up to be (if you’re a lizard)

Recently, myself and collaborators published our study that found – social experience has a crucial role in development of a family-living lizard. We also discovered that despite their social nature, the Australian tree skink (Egernia striolata) does not necessarily thrive in a ‘share-house’ environment. 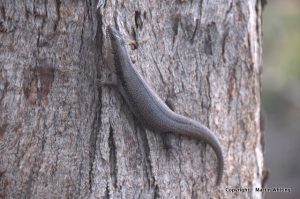 Group- and family-living animals, like humans, birds, and mammals, tend not to cope well if they have to grow up alone. Individuals seem to require particular social experiences that appropriately guide their development. If instead, they grow up alone, individuals tend to be more fearful, more anxious, and less social. These differences in behaviour can also greatly impact an individual’s survival and mating success.

Despite a lot of interest in the role of social experience in the behavioural development of birds and mammals, there has been limited research on how early experience influences later social behaviour in reptiles. Although, research on hatchling veiled chameleons (Chamaeleo calyptratus) found that offspring raised in isolation were more submissive during social interactions and had lower performance in a foraging task, which could indicate reduced sociability and boldness. Also viperine water snakes (Natrix maura) that were incubated in isolation were less social than water snakes incubated in contact with other eggs. These studies found that the presence/absence of social cues during development affected reptile behaviour, but the nature and degree of social interactions with others can also affect juvenile development (e.g., bronze anole, Anolis aeneus). Yet, none of these reptiles are known to live in stable, family groups with parents and siblings. In fact, currently there are only a few documented cases of family-living in lizards, so tree skinks offer a unique opportunity to study how early social experience influences development of a family-living reptile.

In this study, just published in Royal Society Open Science, we raised tree skinks alone or paired with another juvenile and then we repeatedly measured their behavioural traits (exploration, boldness, sociability, and aggression) 4 times across their first year of life. This was a lot of work, and involved watching over 1500 hours of behavioural videos after the 2 years of data was collected!!! We also quantified the type of relationship that each skink formed with its ‘roommate’.

Personality in tree skinks from The Lizard Lab on Vimeo.

The behavioural assays procedures we used in this study

We expected that growing up alone would negatively affect tree skink behavioural development. However, the skinks who were raised alone were not affected negatively in the way that often affects family-living birds and mammals.

Interestingly, within the social environment a dominant-subordinate – or ‘bullying’ – relationship formed, and this relationship affected both the physical and behavioural development of the skinks. Tree skinks grew more slowly in a social environment, as well, the subordinate member of a pair lost their tail more often than any of the other skinks (likely due to aggressive encounters with their ‘roommate’).

In terms of behavioural differences – the dominant skinks became bolder as they aged, perhaps because as they grew larger or ‘won’ in more social interactions they were more likely to exhibit risky behaviour. In contrast, subordinate skinks were the least social and increased in aggression over time, perhaps suggesting that after aggressive encounters with their roommate these skinks may have learnt to avoid social interactions and react aggressively to fellow lizards. These findings show that feedback in social relationships affects juvenile development – and particularly subordinate tree skinks within a pair appeared to pay the price of living with a dominant roommate.

Interestingly, our study was also able to tell us a little bit about how consistent juvenile tree skink behaviour may be. If an individual’s behaviour is consistent over time, this is often referred to as ‘personality’ in the field of animal behaviour. Yet, our study found that the repeatability of tree skink behavioural traits was quite low over their first year of life – perhaps individuals are more sensitive to change while a juvenile than an adult. Currently, only a few studies have examined the development of personality traits, and our results corroborate previous work that found juvenile personality is not temporally stable.

All in all, our study showed that a tree skink’s early social experience – either positive or negative – affects its physical and behavioural development. This is an important insight into the life and biology of reptiles, an under-studied taxon in regards to social behaviour.

We hope that our findings will be informative for reptile conservation and management projects, as well as ethical considerations a zoos and aquaria – as we show that isolation rearing does not consistently impact behaviour across all social taxa. In fact, tree skinks appeared cope well in isolation rearing, perhaps due to existing social variation within wild rearing conditions.

Link to the Macquarie University press release: http://www.mq.edu.au/newsroom/2017/05/03/roommates-not-all-theyre-cracked-up-to-be-if-youre-a-lizard/ (there is some repetition between this article and blog)