Here are some of my favourite popular science books. 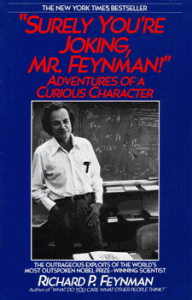 “Surely you’re joking, Mr Feynman”, cried a woman at Princeton University when, after asking a newly-arrived Feynman if he wanted cream or lemon in his tea, he absentmindedly requested both. Surely enough, this is not an ordinary popular science book, but a singular portrait of a peculiar scientist. From his work in the Manhattan Project to his hilarious experiences in a sensory deprivation tank, Feynman’s anecdotes and adventures smash to pieces the physicist stereotype. This is is a book about the eccentricities and irreverent character of the genius winner of the nobel prize but, mostly, it is a testament of the unlimited and honest curiosity of the scientist, and of his unceasing quest to understand. A rare must in every scientist’s bookshelf.

The Elegant Universe, by Brian Greene

“But for more than half a century — even in the midst of some of the greatest scientific achievements in history — physicists have been quietly aware of a dark cloud looming on a distant horizon.” So starts Brian Greene’s brilliant narrative of what is perhaps the Gordian knot of contemporary  science, and of the first steps towards it resolution. The problem? Einstein’s theory of general relativity explains the universe on the large scale, from gravity to the making of stars and black holes. Quantum mechanics does the equivalent at a much smaller scale, from atoms to quarks. Both of them have been confirmed to unimaginable accuracy and, yet, as currently formulated they cannot be both right at the same time. In this book, Greene offers a lucid and surprisingly captivating account of both these theories, and a magisterial lay introduction to string theory, the likely solution to the enigma. If you want to know why you could actually walk through a wall, why apples are not ‘pushed’ to the ground or why you should beware to order a beer in a quantum mechanics bar, this is your book. 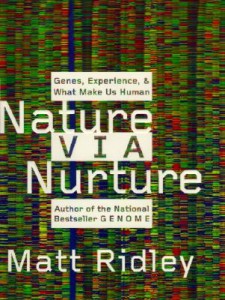 Nature via Nurture. Genes, Experience & What Makes Us Human, by Matt Ridley

Nature via Nurture is one of those rare books that masterfully combine substance with style. To begin with it is a book with a very important message, a necessary gust of fresh air into an old and much abused controversy. Instead of taking parts with either side, Ridley paints a world in which nature has been designed to respond to nurture, not to battle it. In doing so, he seeks to undo much of the damage and misconceptions that have plagued this debate for decades, and in this he greatly succeeds. The receipt is close to perfect: a bit of historical background, an extraordinary diversity of scientific facts and a pinch of speculation, all stirred up with a generous dose of humour and flair. Ridley’s book is an absolute delight to read, and should be compulsory reading for every biologist!