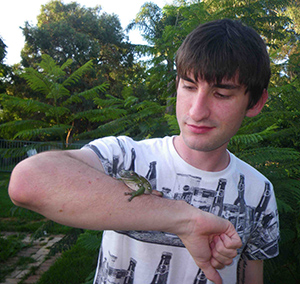 The Australian frog genus Pseudophryne contains a number of species that are similar in behaviour, morphology and call. This often makes identification of species difficult and there is a great deal of taxonomic uncertainty around the species Pseudophryne bibroni. Previous genetic studies have identified P. bibroni as a species complex with several suspected cryptic species occurring in New South Wales. My masters project is to examine differences between geographically isolated populations of P bibroni and P dendyi and to describe previously unrecognised species. By collecting call and morphological data on frogs throughout their range in New South Wales I hope to establish if there are reliable characters that can be used to delineate between the populations. I will also look for and compare differences in the development of tadpoles from different populations. If differences between populations are consistent with the geographic isolation this suggests the populations are their own species. Additionally I will conduct a conservation assessment of each population comparing historical and recent records to determine if any of these populations are endangered and require conservation attention.