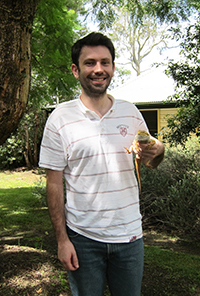 For my honours I studied cognition in Bassiana duperreyi, a small skink species. I examined which factors influence cognitive ability, with a focus on incubation effects, as well as gender or physical factors such as size and speed. This work was in collaboration with Josh Amiel and Rick Shine at the University of Sydney.