Sex in the lizard world: Promiscuous females and protective males

The sex life of Australian water skinks (Eulamprus) has received considerable attention in the past few decades. The Keogh Lab documented alternate reproductive tactics in E. heatwolei and Jess Stapley’s PhD focused in part, on fitness consequences of ARTs. More recently, Dan Noble has been working on ARTs in E. quoyii, and this work will be published shortly (stay tuned for updates!). I just want to quickly draw your attention to a recent paper on sexual selection in E. heatwolei from a series of innovative mate choice experiments designed by Scott Keogh, in combination with genetic paternity testing. The aim of the study was to disentangle the roles of pre- and post-copulatory mechanisms of sexual selection in E. heatwolei. When two males were simultaneously paired with a female the larger male predictably came out tops: 52% of large males but only 14 % of small males sired at least one offspring. When females were presented with lone males (different males multiple times) 80% of large males and 90% of small males sired at least one offspring, and there was no evidence for last-male precedence (last male to mate). The study found no obvious benefit of multiple mating to females and while males play a role in sexual selection through contest competition, females could also be exerting some influence on paternity through manipulation of fertilisation following mating. Postcopulatory sexual selection in lizards continues to be a gray area. The study supports the hypothesis outlined in Uller and Olsson (2008) that female multiple mating in squamate reptiles is best explained by the combination of mate encounter frequency and high benefits to males but low costs to females (of multiple mating). Read the study to get all the details for yourself: PDF. You may also be interested in a related study (Keogh et al. 2012) documenting high levels of multiple paternity and which documents a link between male activity and fitness in E. heatwolei: PDF. 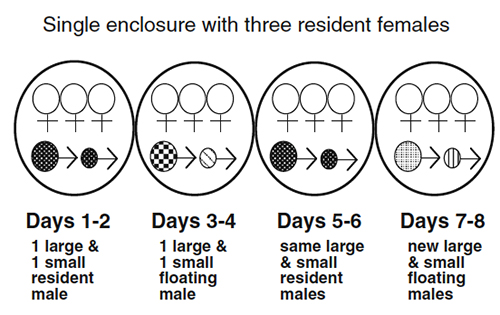 Fig. 1 Depiction of the experimental design for experiment 1 showing the categories of males by size and ART that were presented to females. Each enclosure contained three females that remained in the enclosure for the duration of the experiment while males were rotated among different females (floaters) or with the same female (residents) but, alternately, with rotating groups of floaters (see text for details). 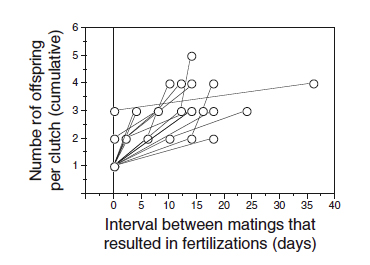