Turn up the colour: male frogs use bright colours to avoid confusion at the pond

Imagine being a frog during the chaos of the breeding season and navigating the gathering crowds around the pond. How do you know who might be a suitable mate let alone whether they are male or female? One solution is colour. If one sex, typically males, is able to turn on some bright colour that not only clears up any confusion about sex identity but also may signal something about male quality. 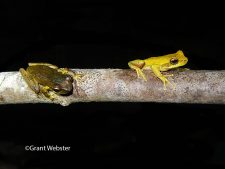 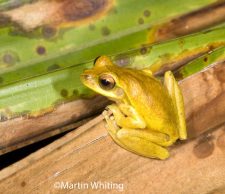 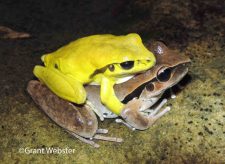 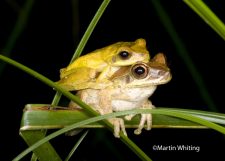 While bright displays are common in the animal kingdom, they come at a cost because they also draw the unwanted attention of predators. One solution to this problem is dynamic colour change whereby an animal can switch between conspicuousness and camouflage, a phenomenon that is well known in flag ship organisms such as chameleons and cephalopods (octopus and cuttlefish) but much less studied in frogs. It turns out that frogs around the world have evolved this ability independently. Grant Webster studied colour change in the whirring tree frog (Litoria revelata) for his honours and an obvious extension of that work was to get to grips with the incidence of dynamic sexual dichromatism (DSD) in frogs globally. At about that time, Rayna Bell and Kelly Zamudio published their review and comparative analysis of frog colour change. After contacting Rayna, we teamed up to expand the work and to also examine the evolution of DSD in hylid frogs, given the high incidence in this clade. It’s been a long road, but now the work has finally been published in the 20 September issue of Journal of Evolutionary Biology.

This, sometimes painstaking, research uncovered 178 species with dynamic sexual dichromatism from 15 families and subfamilies. Interestingly, it is the frog family Hylidae (treefrogs) that really stands out. Of the currently recognised 900+ species, 95 are capable of dynamic colour change and a disproportionate number occur in Australia. So, what drives this process? There are many questions about the relative roles of the environment and social behaviour that remain unanswered. However, our comparative analysis revealed an interesting finding—frogs that first evolved the behaviour of breeding in large aggregations were also likely to evolve dynamic sexual dichromatism. In the hustle and bustle of a large breeding scrum, being able to quickly identify the opposite sex and choose a suitable mate is made a lot easier with a bit of bright colour.

The paper can be accessed here, or e-mail us for a PDF. We will also make a PDF available once the full version with page numbers is available.