What tree skinks know about change: A story in colour and shape

Note from Martin Whiting: This blog posts details a chapter of Birgit Szabo’s PhD recently published in Animal Behaviour and represents an enormous amount of work. Birgit did a 9-month cognition experiment, which could be the longest lizard cognition experiment thus far conducted. (Let us know if it isn’t!) The work is in collaboration with David Tait and Richard Byrne (St. Andrews) and Birgit’s PhD supervisors (Martin Whiting and Dan Noble).

Animals often live in complex environments. They also experience seasonal changes in weather and food availability and changes to their social environment, just to name a few. Reacting appropriately to these changes is crucial to survival. One important skill when facing unpredictable events is behavioural flexibility, the ability to adapt behavior to novel situations. We can look for behavioural flexibility in animals by testing their ability to abandon a previously learned rule.

We presented tree skinks (Egernia striolata), a family-living skink from south-eastern Australia, with a multi-stage visual discrimination task to find out how flexible they are when learning to find food based on colours and shapes.

Figure 1. Tree skink (Egernia striolata) found in arboreal as well as rocky habitats throughout eastern Australia. This species is active during the day and lives in small, stable family groups. Photo by Martin Whiting.

Why did we choose tree skinks? They live in social groups—small family units including an adult pair and their offspring. Social living has many benefits, but can also be challenging. The demands faced from living in a complex social environment can influence the general intelligence of individuals (“social intelligence hypothesis”), making them smarter. We wanted to know if a social life made these lizards better able to cope with change.

In the first stage of our experiment, we presented lizards with a choice between two stimuli: an X and a triangle. The food dish in front of the X provided a food reward, while the dish in front of the triangle did not. After lizards had learned which shape was the rewarded one, we switched the rule. Suddenly the reward was found in front of the triangle. With this simple change, we were able to find out how fast these lizards can stop looking for the food in front to the now wrong X and change their approach to looking for it in front of the triangle. We repeated this simple reversal test two more times with different shapes. Our lizards were able to adjust their choice and learned to respond to the previously unrewarded stimulus in all reversal stages. Contrary to findings from studies of other animals, our skinks did not take longer to learn the reversals compared to the initial acquisition stage. 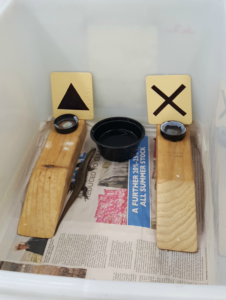 Figure 2. Lizards were presented with a choice of two cards. Food was available in front of only one stimulus. This lizard is on its way to making a choice. 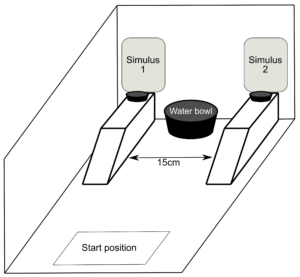 Figure 3. Schematic setup of the experiment. Two ramps were placed on one end of the tub, 15cm apart, with the water bowl in between and the hide at the starting position on the other side of the tub. Cue cards were fixed to the back of the enclosure on top of each ramp with a food dish directly in front. Lizards were not able to see into the food dishes from the starting position but were able to see the cards from any point in the enclosure.

Starting from the third stage, cue cards included both a shape and a colour (background) dimension. The addition of a second dimension is important because we wanted to know how well lizards pay attention and how they react to a change in dimensional relevance compared to the change in stimulus relevance tested during the reversals. This is called an extra-dimensional shift: Instead of changing to the formerly unrewarded stimulus within the shape dimension, we change to the second previously unimportant colour dimension. This means that lizards have to stop paying attention to the shapes and instead find out which colour is rewarded. Extra-dimensional shifts are considered harder than reversals. Our lizards were able to learn during the extra-dimensional shift. However, unlike humans and non-human primates, they did not take longer compared to the intra-dimensional acquisition. They also did not generalise stimuli into colours and shapes but instead, most likely viewed each cue card as a single stimulus and learned which two were associated with the reward. 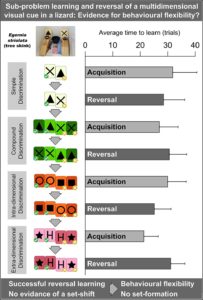 Figure 4. Graphical abstract. Order of stimulus presentation during the eight stages of the discrimination learning experiment. Lizards were able to successfully learn in all stages of the experiment.

So what do our results tell us about tree skink behavioural flexibility? First of all, they are definitely flexible to some degree because they performed well in the reversal stages. Unfortunately, our experiment does not tell us how exactly they perceive dimensions and why they learned so fast in the extra-dimensional shift. Our experiment is, however, a first step towards better understanding learning in lizards and how intelligence developed during the course of evolution.

Download the PDF here or e-mail us for one.

Here is the abstract:
Behavioural flexibility, the ability to adjust behaviour to environmental change by adapting existing skills to novel situations, is key to coping with, for example, complex social interactions, seasonal changes in food availability or detecting predators. We tested the tree skink, Egernia striolata, a family-living skink from eastern Australia, in a set-shifting paradigm of eight colour/shape discriminations including reversals, an intradimensional acquisition of a new colour/shape and extradimensional shift from colour to shape (and vice versa). Skinks could learn to discriminate between colour/shape pairs and reverse this
initial stimulusereward association; however, they showed no significant decrease in the probability of making a correct choice in the extradimensional shift suggesting that they did not form an attentional set. Subjects appear to have learnt each stage as a new problem instead of generalizing stimuli into specific dimensions (set formation). In conclusion, tree skinks solved a discrimination reversal by focusing their attention towards visual stimuli and flexibly adjusting their choice behaviour accordingly. These lizards learned to use multidimensional visual stimuli to find a food reward but did not generalize stimuli into dimensions. Furthermore, this study is the first to test for set shifting in a lizard species and
thereby allows us to extend set-shifting theory to a new taxon for comparison with primates, rodents, a bird and a turtle.