Why blue tongue? A potential deimatic display has been uncovered in blue-tongue skinks

An enduring question among fans of blue-tongue lizards is why the blue tongue? Why have such an outrageously coloured tongue, given that the vast majority of lizards have a regular old pink tongue? Blueys (bluetongue skinks) are something of an Australian icon. They are part of Australian folklore and most Australians have encountered them either in suburbia or while bush walking. They are also a very popular pet and not just in Australia, pet keepers around the world keep and breed blueys.

Not only do blueys have a highly conspicuous tongue, but unlike many other kinds of lizards, it’s a big tongue—the surface area is large. When blueys do a ‘full tongue’ display, the mouth is opened widely and the tongue is flattened and expanded. At the same time, they may hiss and puff-up their body for maximum effect. This behaviour, in combination with a highly conspicuous tongue, can be quite intimidating for anyone that has got too close to a wild bluey. 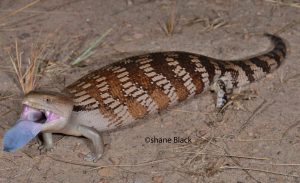 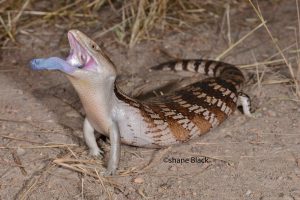 Our lab researches colour signals in lizards and we wondered whether the blue tongue might constitute some kind of signal or display. Martin, together with Pau Carazo, a postdoctoral researcher at Macquarie (now at the University of Valencia), began measuring tongue ‘colour’ using an optic spectrophotometer in 2011, which allowed them to quantify spectral reflectance. The first key finding was that the tongues were not only blue, but also had a very pure UV component, and the purest or most obvious UV was also at the rear of the tongue. In a recent paper in 2015, a team from Charles University in Prague documented UV-reflectance in the Indonesian Bluetongue Skink (Tiliqua gigas) and hypothesised that UV signals primarily play a role in intra-specific communication (e.g., avoiding male-male contests) and secondarily in a predation context. 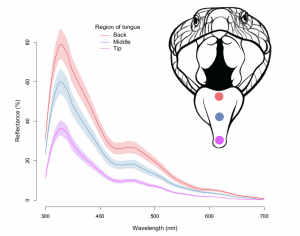 Figure 2 from our paper. “Fig. 2 Mean spectra ± standard errors of different regions of the tongue (i.e. back, middle, and tip). Associated illustration (by Courtney Walcott) is of a Bluetongue skink performing a full-tongue display.”

UV is visible to only some mammals (e.g. marsupials) and not humans, but is visible to lizards (i.e. other blueys), birds and snakes. Given that both male and female blueys have UV tongues, we hypothesised that the tongue colour probably evolved in response to predation pressure. Some animals use a highly conspicuous display (termed a deimatic display) in an attempt to overwhelm the sensory system of a potential predator (see Umbers et al. 2017). This display results from the animal transitioning from a cryptic state to a highly conspicuous state. Deimatic displays act as a form of sensory overload that causes a predator to pause or even abandon its attack. In the case of the bluetongue skink, the cryptic state would be when the mouth is closed and they transition to a conspicuous state when they gape their mouth and flatten and expose their tongues.

To explore this idea, we collaborated with Sam Price-Rees, who was studying a population of the Northern Blue-tongued lizard near Kununurra, in the Kimberley of Western Australia. We placed blueys in a large-outdoor enclosure, where we held them briefly in order to test their behavioural responses to model (i.e. fake) predators. Blueys were presented with a model snake, bird, monitor lizard, fox and a control (a piece of wood) in order establish if they use their full-tongue display as a means to intimidate or overwhelm the sensory system of a predator. While we could not present blueys with actual predators, which would undoubtedly answer this question, we could predict how the bluey would respond if it believed it was being attacked by a real predator. Arnaud Badian, a PhD student at the time, began painstakingly analysing all the data we had collected from the videos and the measures of colour from the optic spec. This was a big task and it paid off. A key prediction is that the blueys would wait until the predator was relatively close before using a full-tongue display in association with threatening behaviour. That way, any potential predator would be most susceptible to intimidation or sensory overload. Indeed, this is what happened. Blueys did not respond much to the piece of wood (control) while they showed a strong response to the model predators that would normally represent the greatest threat. By delaying their display until the predator was very close, and exposing the rear of the tongue, which has the most UV and which is the brightest, blueys maximise their chance of intimidating a predator and surviving another day.

The next step is to build a robotic bluey with interchangeable tongues of different colours and then to present it to predators to confirm the anti-predator hypothesis. We have done exactly that, and we are in the process of testing the response of predators (kookaburras) to UV-tongues. This project is led by Sergio Naretto, who spent a year in the lab on a postdoc from Universidad Nacional de Córdoba in Argentina. The other team members include Martin Whiting, Kate Umbers, Will Bailes and Sarah Campbell. Sergio spent many painstaking hours trying to replicate a UV tongue with which to use in the robo-bluey. As a first step, Sergio harvested tongues from freshly-killed blueys that we got from vets because they had either been hit by a car or attacked by a dog. He then sectioned the tongues and examined the ultra-structure using scanning electron microscopy. Then, in collaboration with Professor Zhong-Ze Gu and Haibo Ding of the Bio-inspired Materials and Devices Group (BiMD Group) at Southeast University (SEU) in Nanjing, China, who work on nanostructures, they were able to replicate the UV surface of the tongue. This is no mean feat. Lots of studies have managed to block UV, including previous work we did on UV signalling in flat lizards, but little effort has been made to replicate a UV structure. The robot was designed and built by Will Bailes, an engineering student at Macquarie and it is currently being fine-tuned and tested in the wild by Sergio and Sarah Campbell, a Masters student at Macquarie. 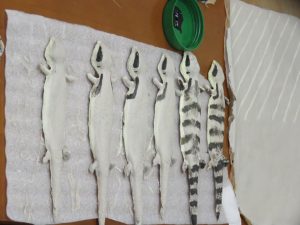 Model blueys made from moulds of actual blueys. 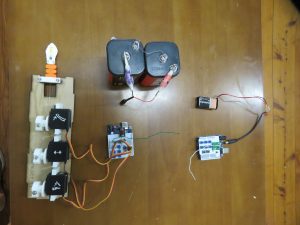 The mechanical device driving the robot.


Sergio also collected lots of behavioural data on the Eastern Bluetongue Skink, and we have measured tongue colour in a range of other blueys, including babies and adults.

Stay tuned for the next phase of this study!

References
Abramjan A, Bauerová A, Somerová B, Frynta D (2015) Why is the tongue of blue-tongued skinks blue? Reflectance of lingual surface and its consequences for visual perception by conspecifics and predators. Naturwissenschaften 102:1–12