Why do winners keep winning?

Animals often find themselves in direct competition with other individuals for resources and mates. Because fighting is costly, many species honestly signal their fighting ability to avoid injury (non-escalated fights). For example, in flat lizards (Platysaurus broadleyi), males can resolve dominance status by displaying their UV-reflective throats to their opponent. However, when opponents can’t resolve conflict through these displays, interactions often escalate to physical fighting which can be quite costly to both parties (escalated fights). 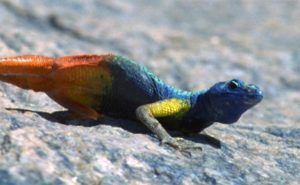 Male flat lizard showing off his colourful throat to ward off rivals. Photo by Martin Whiting.

Our recent paper published in Behavioral Ecology and Sociobiology explored the effects of prior contest experience (whether you won or lost your previous fight) on fighting behaviour and how this may influence future contest success in Eastern Water Skinks. 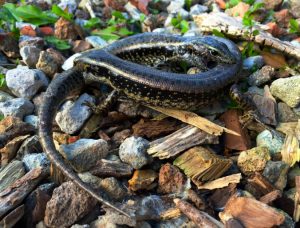 We staged contests between pairs of size-matched males and recorded 1) which individual initiated the interaction; 2) whether the fight escalated to physical biting; 3) if so, how many times did the contestants bit his rival; and, 4) the winner.

Contrary to what we predicted, the total number of times a lizard bite his rival was not an important predictor of contest outcome in escalated contests. Biting behaviour was not influenced by prior contest experience either! Instead, body mass differences between the contestants seemed to be more informative: heavier males had an upper hand in escalated contests.

What these results suggest is that the effects of contest experience on fighting behaviour depends on how a contest escalates. The effects of experience seem to act most strongly when the contest is non-escalated, which implies that prior contest experiences may alter an individual’s perception of its own fighting ability. Prior winners may feel better about their ability and thus are more motivated to engage first in the next aggressive interaction and this is likely very intimidating to a rival!