When it comes to animal athletics lizards have been model systems for exploring the relationships between ecology and physical performance. Our two recent papers, one in the Biological Journal of the Linnean Society and the second in Behavioral Ecology add to the growing list of studies looking at functional performance in lizards. 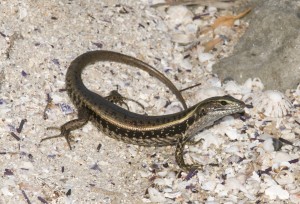 In our first study, we explored the proximate underpinnings of physical performance in lizards and tested what might drive differences in performance between the sexes. Sex-dependent performance is found in many animals, including humans. Males tend to excel in activities such as running and jumping. The same is true for many lizards. But why are males better athletes than females? This is actually a very difficult question to answer because males differ from females in a number of different ways. For example, aside from hormone differences between the sexes, males are often larger than females and as a result differences in size can allow males to dominate in performance related activities.  One way to get around this is to control for size, but how can we do this? Well we could explore functional relationships in species that are not strongly sexual dimorphic because physiological traits that scale with size should be much more similar between the sexes. This provides a unique opportunity to explore how proximate mechanisms, such as hormones, affect the physical abilities of males and females and whether such physiological traits drive performance differences between the sexes.

Measuring endurance on a treadmill.

In our recent paper published in the Biological Journal of the Linnean Society we tested whether a key hormone, thought to be different in males and females, was a driver of performance differences using our familiar and charismatic lizard species, the Eastern Water Skink (E. quoyii). The cool thing about E. quoyii is that males and females are of similar body size (at least in length). The notorious hormone I speak of above was testosterone. Testosterone is known to be an anabolic (build up) hormone, promoting muscle and body growth. It also affects a whole suite of other physiological parameters. We predicted that differences in circulating testosterone may be one reason why performance may vary between individuals and possibly explain any sex differences in performance. In our study we collected over 200 lizards and took measurements of their androgen levels (testosterone-like hormones) and tested whether: a) it varied between the sexes and b) whether it was positively related to performance in males and females. What we found was interesting. First, as expected males and females did not differ in body length, but did differ in mass and head size with males being heavier and having larger heads. We also found that males were far better performers than females. They ran faster, longer and bit much harder than females. However, surprisingly, we found no differences at all in the levels of circulating hormone concentrations between males and females and also found that it was not related to any of the performance traits. Despite this, we found huge variation in hormone levels, from individuals with virtually non-detectable levels to ones having orders of magnitude higher concentrations. We also found that androgen concentrations may not be related to performance in a simple linear way in males (although much more work needs to be done on this front). The jist of our results are that despite no differences in androgens males and females still differ substantially in their athletic abilities and that body size (at least length) and testosterone don’t seem to be the main reasons. However, we suggest that these differences may arise as a result of the development of different limb and head sizes, which contribute to running and biting performance that are likely organized differently among the sexes as they develop. This may have been a result of different sensitivities to androgens at key periods of growth of the limbs and muscle. The differences in the shape between the sexes suggest that differential selection on performance traits occurs between males and females. However, that is another story and for selection to result in evolutionary change these traits need to be heritable. But are they?

In our second study published in Behavioral Ecology, we explored whether running speed and endurance had additive genetic variance and showed evidence of being heritable (traits can be passed on from one generation to the next). Interestingly, we found weak evidence that sprint speed was heritable, but rather it appears to be strongly controlled by the phenotype of the mother. When a mother’s phenotype affects the phenotype of their offspring beyond their genetic contribution, this is called a maternal effect. These can have very interesting effects on trait evolution. In contrast, running endurance showed reasonably high heritability suggesting that, if selection were to act on endurance, this trait has the potential to respond to selection.

You can read more about our work in the Biological Journal of Linnean Society and Behavioral Ecology by downloading the papers here.