Curious about the natural history of Australian lizards?

The Lizard Lab recently had the pleasure of a visit from Steve Wilson and he was kind enough to bring a few copies of his new book Australian Lizards: A Natural History. As Steve points out in the preface, we don’t hear people talking about lizards nearly enough! The root of this problem may, at least in part, be because of the general absence of books on lizards that are easily accessible to the public. There seems to be no shortage of bird and mammal books on the shelves of the last remaining book shops, but not much on lizards and other reptiles—especially not on the natural history of Australian lizards. 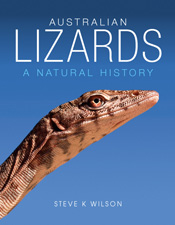 I would be remiss not to mention Allen Greer’s The Biology and Evolution of Australian Lizards, Eric Pianka’s Natural History of Desert Lizards or Hal Cogger’s monumental The Reptiles and Amphibians of Australia (6 editions). However, Greer and Pianka’s books are written for a technical audience while Cogger’s book consists of species accounts. There is also Keeping and Breeding Australian Lizards, a fairly significant work (618 pp.) edited by Mike Swan that serves as an important reference for the captive breeding community. While these works all contain important natural history information on lizards, none are suitable as an introduction to lizard natural history for the interested general public. (For an excellent overview of lizard natural history from a global perspective see Pianka and Vitt (2003).)

Australian Lizards attempts to redress this issue and consists of ten chapters dealing with various aspects of natural history (e.g. diet, reproduction, habitats, physiological ecology, etc.) and ends with a chapter on their conservation status. The book is a basic overview of lizard lifestyles and as such, the chapters are all relatively brief. This is a book you can comfortably read during the course of a day and you will come away with a new admiration for the remarkable diversity of life history strategies employed by Australian lizards. You will learn about the evolution of viviparity, temperature-dependent sex determination and parthenogenesis. You will also learn about the unusual diets of some lizards, such as geckos that feed on sap and nectar or the ever popular Thorny Devil (Moloch horridus) that eats nothing but ants. A major strength of this book is that it is so richly illustrated with amazing photos of lizards in action. The photos all tell a story, and perhaps the best example of this is a photo of a dead Perentie (Varanus giganteus) with an Short-beaked Echidna (also dead) lodged in it’s throat. This unlucky pair were in fact discovered mummified in 1912 and are now on exhibit in the Queensland Museum.

No book review is complete without at least one quibble! Mine is that I think that students of lizard biology will at times be frustrated with the cursory treatment of their pet interests. However, this book is intended as an introduction to lizard natural history with a wide audience in mind and was never intended to be a comprehensive treatise. My quibble is therefore more of an observation than a criticism.

Australian Lizards is a book that should be owned by all keen naturalists. I sincerely hope that young Australians read this book and venture forth into the leaf litter of their back gardens and the surrounding bushland in search of lizards—a generally neglected but very unique component of the Australian fauna. There are > 690 species of lizards in Australia and more being described every year, so there is much still to be discovered about their fascinating life styles.