Dispatches from China part 1: Lizards, culture and our inability to understand the Chinese currency

For all those Lizard Lab followers, you’re in for a treat! For those of you who are not aware, Martin and Dan have been travelling through China with some colleagues (Dr. Qi Yin and Wu Yau Yong) to look at a peculiar and unique lizard population in the far North of Sichuan Province. Our adventures so far have been diverse, eye opening and tonnes of fun! We spent our first night in the capital city, Chengdu. We arrived late, but we decided that it was absolutely imperative that we try out the Chinese beer (its 3%), just to make sure that it was up to par with the Australian beer. After getting to sleep at 2:00AM, we got an early start to the next day, driving 8 hours through the country side. The drive took us through some of the worst hit areas of the 2008 earthquake, which destroyed tonnes of towns and villages. 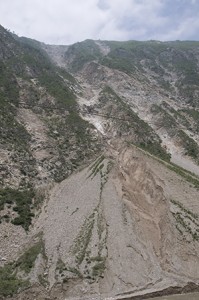 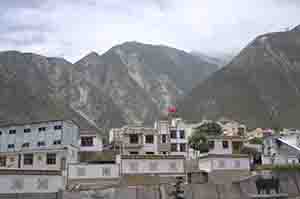 Wenchuan was the epicentre of the earthquake in 2008--completely demolished. Here it is newly rebuilt. 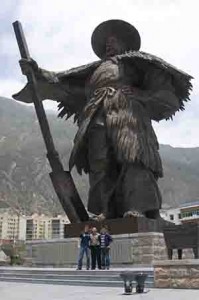 A small statue of a famous Chinese figure: Dar yu in Wenchuan with Dan, Yin and Ya yong providing some scale.

The drive through the country side was heart pounding at times! We still don’t actually know which side of the road China drives on or whether a rigorous driving test is in place. So, we can’t seem to access YouTube in China. We all know they are a huge political threat (no Facebook either, by the way). That means we couldn’t embed the video so just click on the link to view it.

Along our journey we travelled through some very rural areas. The food was a diverse array of incredible spicy (well especially for Dan) vegetables, pork, noodles and fish which set the bar high for Sichuan food. 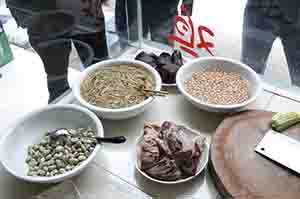 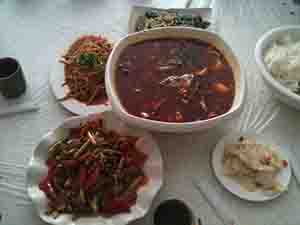 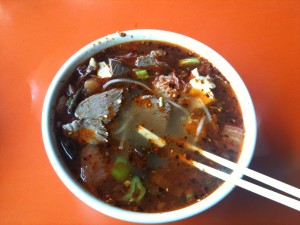 Yak noodle stew in Xia man. A first for us!

We ended our first day of travel in a small city in Northern Sichuan, Zoige. Zoige is at a fairly high elevation and it took both of us by surprise when a seemingly simple task such as walking up two flights of stairs, knocked us off our feet! We were to stay here for the night in order to get supplies the next day for our 10 days at the Zoige Conservation Station. Our hotel contained all the essentials, including a “glass house” washroom. Even at this time of the year it is VERY cold and we were thankful that we had heat in the hotel (but no hot water!).

We packed up early the next day and started off getting all the essentials from the local shops. Of course we were interested in what they had so we decided to go off into a small store on our own and take a look. After walking briefly through the store we laid our eyes on some chocolate bars. Seeing that we were going to be isolated for a few weeks we decided to purchase a few bars before departing. The bars cost 4.50 Remingbi (Yuan) and we only had 100 on us. We thought this was a great opportunity to get some change. After attempting to give the bill to the cashier who looked at us strangely and muttered in Chinese, we were directed to the next counter.  The gentleman was kind enough to give us all the change and we happily took our bars and left the store. About 3 minutes later a rather angry cashier ran out after us speaking in Chinese. Of course we had no idea what she wanted, but it turns out that we stole the two chocolate bars by accident because the second cashier only gave us change for the 100 Yuan, but did not charge us for the bars. After resolving this small conflict, and having more confidence in our ability to purchase product in China, we decided to buy a few more bars for the road. This time we were ready to pay with all the change we were given from the other cashier. The total bill came up to 42.50 Yuan and we happily gave the lady two 20 Yuan bills and a small 5 Yuan bill. The lady looked at us and wondered, we thought, whether we needed change. Martin, having all the money in the world of course told the cashier that we didn’t need any change and we proceeded to exit the store. Looking rather confused when we told the cashier we didn’t need the change the women keep talking about adding more money. Of course we weren’t getting ripped off so we called for Wu Yau Yong to translate. Turns out that the lady was telling us that we only had 41.00 Yuan that we needed to pay here 2 more Yuan! The small “5” Yuan we gave here was actually equivalent to a 50 cent piece not the 5 Yuan we thought it was supposed to represent. After that fiasco we vowed to only buy things will the aid of properly trained Chinese natives! We thought it would be best to leave the city as soon as possible seeing as the Police  had their eyes out for us after having almost stolen the chocolate bars. But before we could do this we had to visit two more places. The first was a local grocery store to by water, rice, toiletries and all that stuff. The second was a local market to purchase all the vegetables. 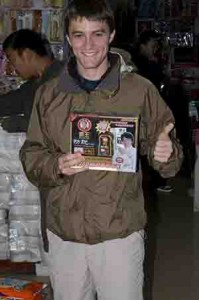 This is Dan endorsing a product endorsed by Jackie Chang. 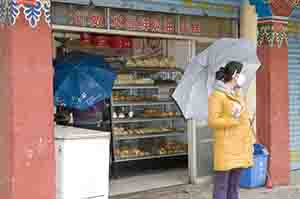 An amazing little bakery in Zoige.

Once we had everything in order we drove another 90km to our final destination, Zoige National Wetland Reserve, where our lizards are found. The landscape here is incredible. Being at 3500-3800m elevation it is one weird place for reptiles to be. Well that’s about all for this post. Make sure to stay tuned to hear about all the exciting things we are up to!

By the way, we can’t access our e-mail. It may have to do with China’s relationship with Google. Who’s to say? But we will keep everyone updated with blog posts when we can (normally rainy days).