Up for a fight or doing a runner, for a lizard it could be in their genes

But, what factors are responsible for the innate behaviours of young animals? Newborn gartersnakes display different anitpredator behaviours depending on the species. Moor frog tadpoles exhibit population-level morphological (tail shape) and behavioural (activity) differences that suggest localised adaptions to predators. Although habitat may play a role in determining antipredator behaviour, it also may be genetically linked. We set out to determine what factors explain variation in hatchling Australian water dragon (Intellagama lesueurii) antipredator responses. 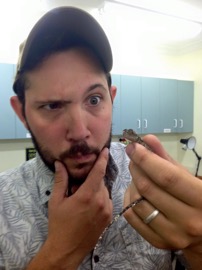 The study, recently published in Behavioural Ecology and Sociobiology, involved collecting hundreds of water dragon eggs from across Sydney and incubating them in the lab. After they hatched, we simulated an ‘attack’ using a 1-m long rubber model of a red-bellied blacksnake (a known predator of these lizards). We then recorded how the lizards responded to this threat immediately after hatching; armed with nothing more than their DNA and the instinctive behavior pre-programmed within it.

Although we examined multiple factors that we hypothesized could impact water dragon innate anitpredator behaviour, study found a strong link between relatedness and whether or not they decide to fight or flee from a predator. Larger hatchlings were more likely to flee, while smaller ones were more likely to fight. This variation in body size and behaviour may be linked to the biology and ecology of the lizards. Larger individuals are easier for predators to spot, and have longer limbs to sprint with. Meanwhile, smaller individuals are more difficult to sight, but when a predator gets too close their best option may be to muster the courage and mount an offensive. Our study echos the trend found in Iberian rock lizards – wherein smaller lizards hold their ground longer whereas larger conspecifics are more prone to fleeing.

Most water dragon hatchlings exhibited a flight response to a simulated predator attack (white-shaded pie slices), while some were immobile (light shaded grey pie slices). But some Water Dragons (shaded in dark grey) exhibited a fight response. A hatchling water dragon, when standing its ground, can be a intimidating sight! They often gape their mouths (pictured on the left), and can swish their tails, puff their throats, and even bite! 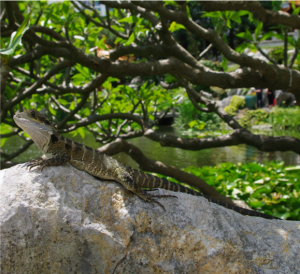 A young water dragon may be more ready to take on it’s world than many give it credit for – they are armed with a suit of antipredator behaviours that are likely passed on to it from generations before.

Interestingly, both body size and antipredator behaviour were more similar between clutch-mates (siblings), suggesting that both of these traits are heritable and may have a family origin. This finding sheds light onto how we think about instinctive behavior, and what survival tools are built into an animal’s DNA. All the lizards in our study had no prior experience, and were fresh out of the egg! Understanding what drives trait variation is a cornerstone of evolutionary biology, and our findings raise questions about how selection acts on lizard antipredator behaviour and the degree to which it is plastic.

Read a copy of the paper here.